As Clemson and Alabama counted down to play the CFP National Championship game Monday, January 11 in Glendale, Arizona, former All-American offensive lineman Tony Mandarich gave audio listeners nationwide an earful about how XLNTbrain Sport™ can help save football from concussions.

From the LIVE and recorded interviews, XLNTbrain and the new book Concussion-ology, by Dr. Harry Kerasidis received attention from popular sports programming in Arizona, Alabama, South Carolina, Texas as well as two nationally-aired programs, including:

An excellent radio guest, Mandarich was hot property for the “Audio Avenue” programs having been recruited to Michigan State by Alabama Head Coach Nick Saban, the former Defensive Coordinator for the Spartans. Mandarich, one of the most sought after college and professional football recruits to ever play the game, was an All-American for Michigan State in 1988, and picked second overall by the Green Bay Packers. Based in Scottsdale, Mandarich is a professional photographer with an extensive library, and related services at http://www.TonyMandarich.com.

While on the air, Mandarich discussed XLNTbrain, its online and mobile concussion tests while encouraging athletes to take greater responsibility, and for parents to ask their youth sports teams and leagues to find out what concussion protocols are being followed.

“It may surprise you, but even at high school and college levels, many programs do not have a concussion protocol in place,” Mandarich said. “I tell people to find out what they are doing, and if they don’t have something like XLNTbrain in place, they are putting their kids at risk,” he said.

This audio coverage follows a significant amount of additional media coverage received over the holidays about Dr. Kerasidis’ work. Specifically, the Associated Press wired news nationwide about how Michigan is providing a possible model for implementing clinical-caliber concussion care at the high school levels. The story was picked up nationwide, including USA Today. 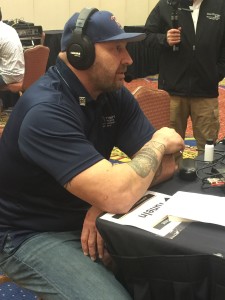 Mandarich played his senior year of high school football at Theodore Roosevelt High School (Kent, Ohio). Recruited to Michigan State University by defensive back coach Nick Saban, Mandarich played in the 1988 Rose Bowl, was named as a First-team All-American, an Outland Award finalist and a two-time Big Ten Lineman of the Year. Upon his entry into the 1989 NFL Draft, both scouts and media (most notably Sports Illustrated, which did a cover story on him, nicknaming him “The Incredible Bulk”) began trumpeting Mandarich as the best offensive line prospect ever, touting his “measurables,” He weighed 330, ran the 40 in 4.65 seconds, did a standing long jump of 10′ 3″, leaped vertically 30″ and bench-pressed 225 pounds an unheard-of 39 times”. He appeared on the cover of Sports Illustrated twice and was also a colorful, outspoken character. He is also the highest-drafted Canadian-born player in NFL history.