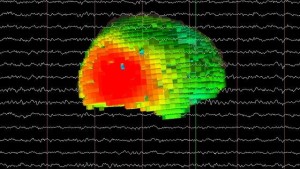 According to Dr. Kerasidis, his findings point to remarkable discoveries that will lead to greater understanding of mild traumatic brain injuries, their detection and healing timelines. The preliminary results from the study showed three patterns emerge among the high school age student athletes within the first few days after concussion injury:

Dr. Kerasidis also said the study found that once the athletes became symptom free and cognitively return to baseline scores, there was a parallel resolution of the abnormal slow and mid range EEG abnormalities, with improvement but not resolution of the fast deregulation.

He added that more research is needed to further evaluate these findings and put perspective on their implications on return-to-play decision making.

“We were amazed at some of the findings. For example, it appears that concussions may have longer lasting effects on children than adults,” said Dr. Kerasidis, who designed XLNTbrain Sport™, and authored Concussion-ology: Redefining Sports Concussion Management for All Levels. “By combining the brain mapping with the symptom tracking tools, among others in XLNTbrain Sport, we have the methods to obtain scientific data to build our knowledge of concussion recovery.”

The sLORETA analyzes electrical patterns at the surface of the scalp which reflect cortical activity, also referred to as “brain mapping.” Additional data collected with the XLNTbrain concussion management tool, allowed researchers to compare the sLORETA feedback with the individual’s symptoms throughout recovery.

“Through brain mapping and XLNTbrain, we have shown concussion recovery can be tracked which enables us to do so much more in the area of research,” Dr. Kerasidis said. “The XLNTbrain Sideline Assessment Tool helped detect the concussions and monitor the recovery process with automated reporting.”