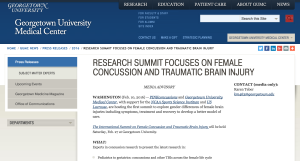 Today the Georgetown University Medical Center announced the speaking lineup for the first Research Summit on Female Concussions and Traumatic Brain Injury, hosted in part by the NCAA Sports Science Institute, PINKconcussions, US Lacrosse and included neurologist and co-founder Harry Kerasidis, MD as a presenter.

Dr. Kerasidis will share his latest findings based on the widely-reported concussion protocol pilot program that began last year on nearly 10,000 student athletes through the Michigan High School Athletic Association.

Using the online- and mobile-based XLNTbrain Sport™ program, Dr. Kerasidis has been able to measure differences among male and female athletes.

This most recent compilation of data will be compared to an August report about a gender study conducted by Dr. Kerasidis that showed key differences from the baseline concussion tests. Females, for example, are more likely to report concussion-like symptoms at baseline. While males tend to report hardly any. He also found some evidence to suggest that there is a correlation between the severity of a migraine and the length of recovery time. The more headache pain, the longer the recovery period.