Concussions can be a dangerous health risk

Confusion is the most common symptom but there are lots of symptoms to watch out for.

Excessive drowsiness or inability to sleep 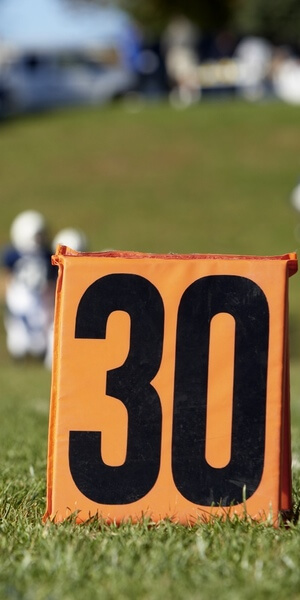 Symptoms don’t always occur immediately, and can show up hours or days later.

Move the unconscious player immediately off the field for observation.

Never move an unconscious individual until a neck or spinal cord injury can be ruled out. Also, do the ABCs, check airway, breathing and cardiovascular pulse before deciding to if/when/how to move the concussed individual.

Concussions bring a variety of short- and long-term potential consequences to an individual’s quality of life, including:

The most serious consequence is when a second traumatic event is sustained to the already concussed brain, before the first trauma has completely recovered. This is called
second-impact syndrome
causing sudden swelling of the brain, exacerbating previous injury healing process and can be fatal.

Seizures typically occur immediately upon losing consciousness or within the first week of the injury.

The most common consequence of a concussion is when the symptoms persist and cause complications with the quality of life, including:

People with a history of migraines are more vulnerable to concussion injury.
The Brain Doctor

CTE is a progressive degenerative disease of the brain found in athletes (and others) with a history of repetitive brain trauma, including symptomatic concussions as well as asymptomatic sub-concussive hits to the head.

Brain scans show brains with CTE have a build-up of Tau protein, and look like a brain afflicted by Alzheimer’s disease. CTE, the focus of the NFL lawsuits, may also be affected by lifestyle factors that can add stress to the damaged brain, including smoking, alcohol abuse, drug use, poor diet and lack of exercise.

The most serious consequence is a decrease in overall quality of life due to loss of memory, ability to focus your thinking, and making good decisions.